Chilling out in Laos

I know I haven't given news for a while and my trip now approaches to an end so prepare yourself for a bunch of articles in the next days!

After the hectic months I had just spent in New Zealand, Korea and Hong Kong, I really felt like I needed to take a break and to slow down the pace of my journey. Indeed people back home keep telling me that "you are on holiday, how can you be exhausted?" but the truth is that when you pack and unpack your bag every few days to go to another destination, visit another museum or another "amazing" waterfall, you start feeling a bit less impressed and more and more tired. When at the beginning I was finding myself craving for new adventures, I now enjoy a lot spending days relaxing and not doing much.

So in that perspective, Laos was quite a breather for me. After an overnight stay in Bangkok airport because of the cheap flight I had booked from Hong Kong, I arrived in a really hot day in Vientiane, the capital of Laos. The temperature change after a freezing Korea and a sometimes chilly Hong Kong, was quite a shock. But in a way I adapted myself quickly to that environment by incorporating the local motto "hum... it's really too hot to do anything today, let's chill out..." !

And here are how my days in Laos were mostly spent...

The capital of Laos is actually quite small compared to the ones of the countries around. But it has still a definite atmosphere of South East Asia, with tuktuks, markets and street food stalls all around. I was also surprised to see a lot of signs (like for the official buildings) written both in Lao and French, but as Laos was a former French colony (used to be part of the Indochina with Vietnam and Cambodia) it all made sense. However nowadays French is only being spoken by older people, the younger generation learning English, which is more useful for tourism purposes.
One of the only sites I visited in Vientiane was Buddha Park, a statues park where 60 years ago, a monk who integrated Buddhism and Hinduism, tried to gather and build statues to revere the Buddha. Here are a few pics: 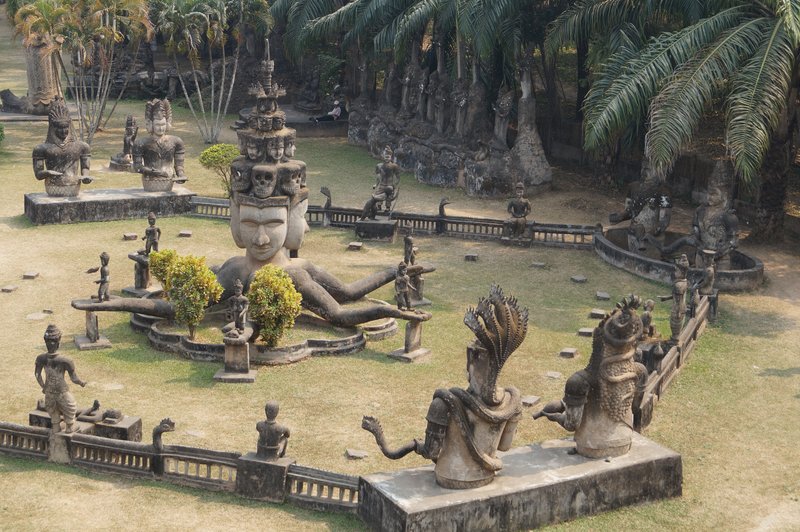 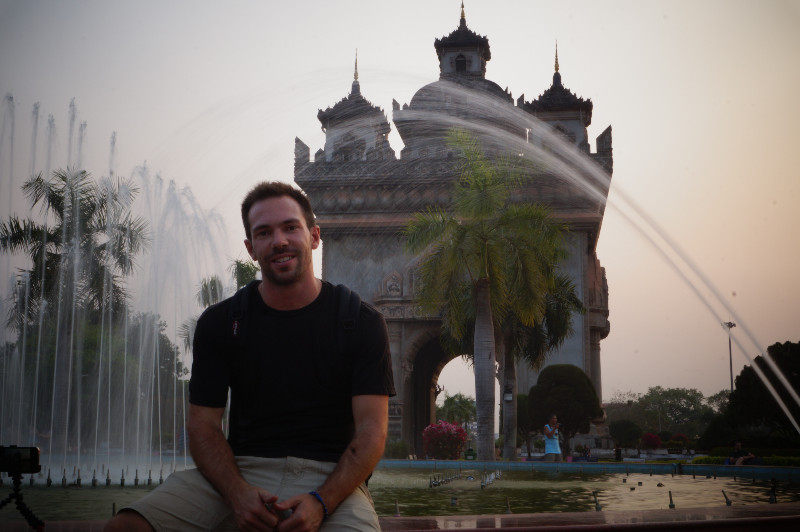 Patuxay, the War monument in Vientiane 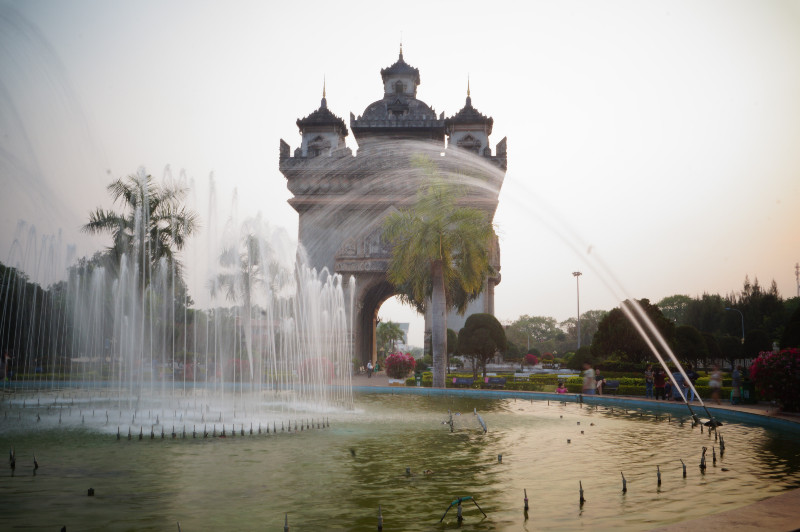 Vang Vieng has been known for a long time has a party place, where the main attraction was to go down the river in a tube, and to stop every 100 metres or so at the several bars along it. No need to say that everyone was ending up really drunk and of course with time accidents happened (even deaths). So the whole thing has now been downsized a lot and out of the 50 bars or so, only 4 remains. And where maybe in the beginning it was really about tubing and going down the river, now the first and last bars are only at a mere 500 metres from each other so most of the people stop at the last bar and get a ride back in a tuktuk instead of carrying on for 2 to 3 hours on a perfectly still river (that was just before the rainy season so the river was at its driest level). Anyway the whole experience was quite fun, we met nice and funny people, but I could definitely see how it could go wrong if you keep drinking and don't pay attention to the time (it gets dark right after 6pm). Being drunk and on the river in the dark for a few hours was probably not a good idea...

Anyway Vang Vieng is not just about tubing but also has stunning landscapes to offer with limestones mountains covered by vegetation, caves to explore, lagoons to jump in, etc... 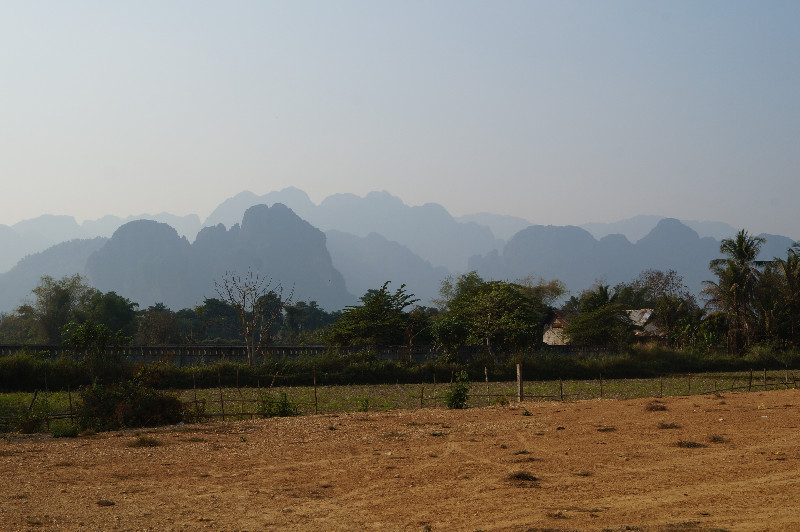 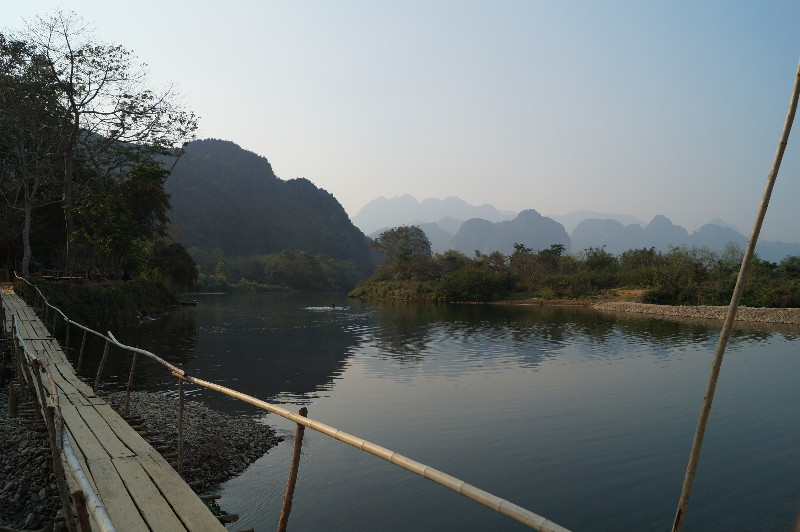 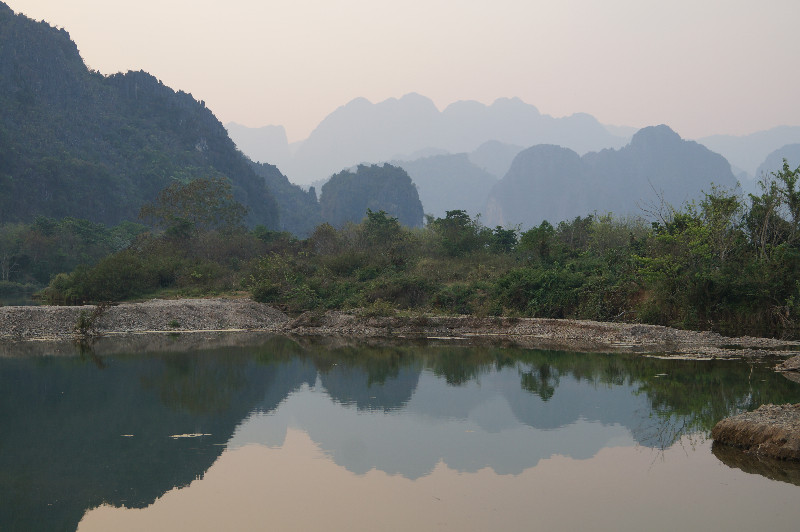 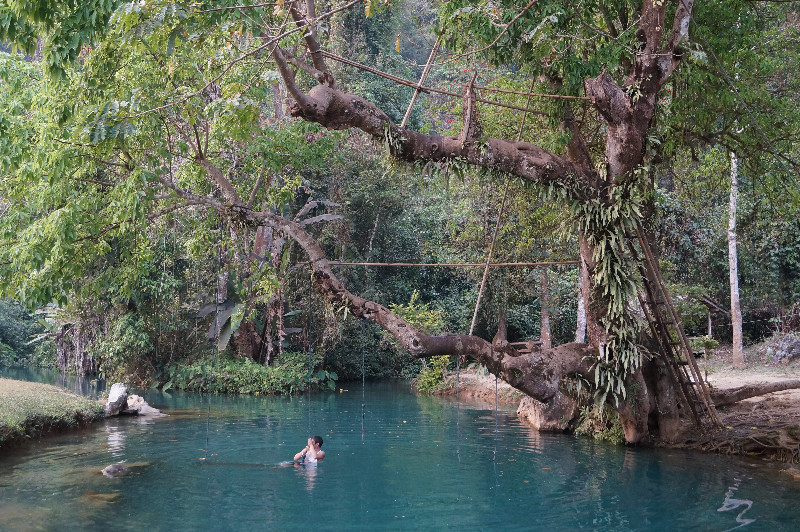 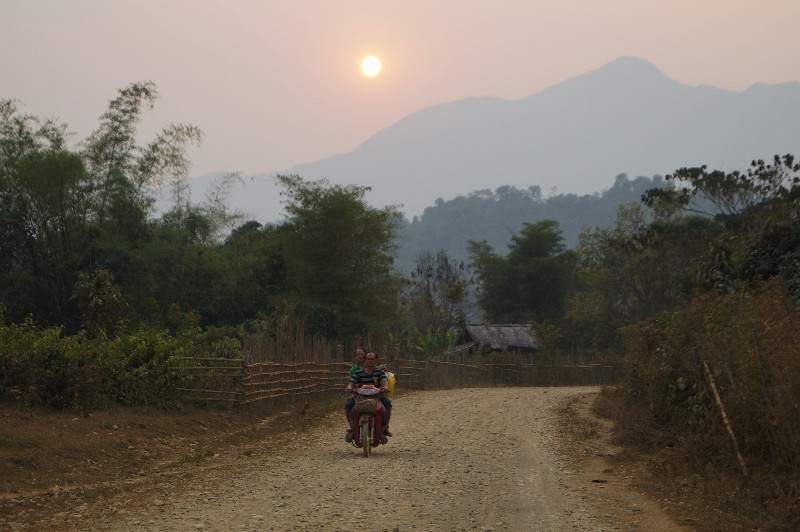 Renting a motorbike is a lot of fun but can be a bit risky...

The journey continued in Luang Prabang, a small city classified as an UNESCO World Heritage Site since 1995 and located between the Nam Khan and Mekong River. Here tons of tuktuk drivers will approach you in the main street, asking you if you want to go to the waterfalls, elephant villages or some temples... then later in the evening the same people will change their offers for the bowling alley (the only place opened late at night) or to sell you all type of drugs or again to take you to the "ladies boom boom"... Hum.....
Anyway I had a good time there, and we even managed to find a place completely randomly where to play pétanque (french balls game) while enjoying some cold beers with the locals, great fun! 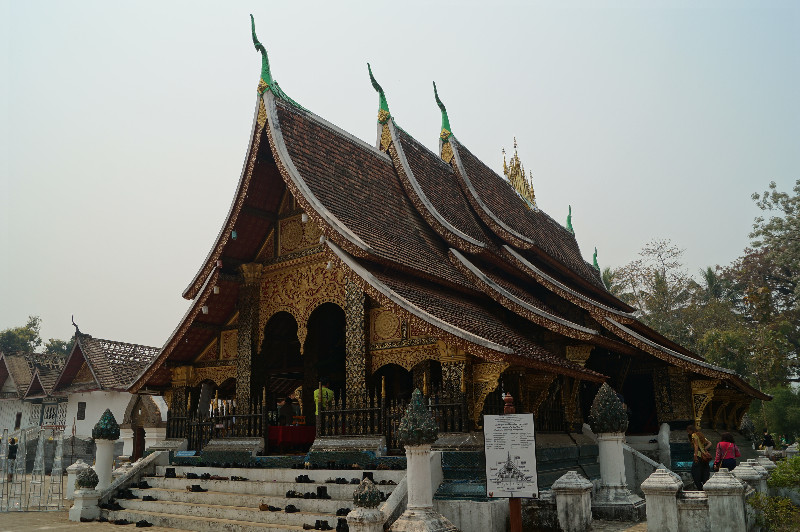 One of the main temples in Luang Prabang 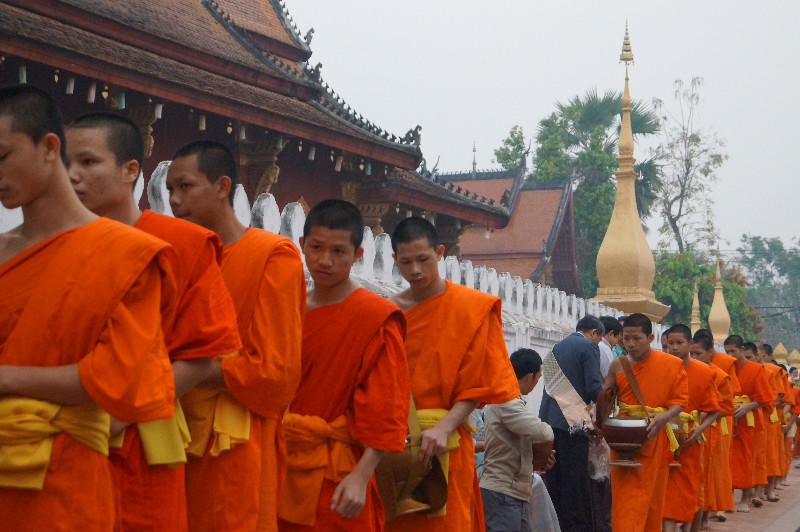 Every morning around 6am, monks go down the main street for the Alms giving ceremony, where locals give them food for the day 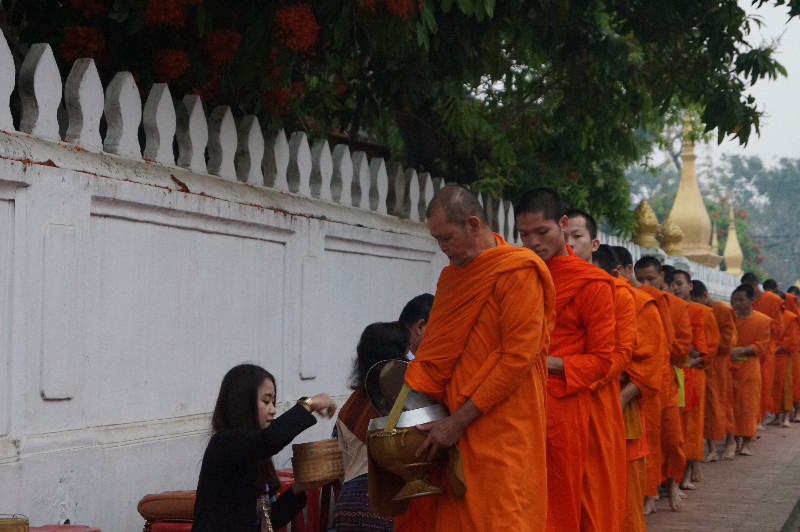 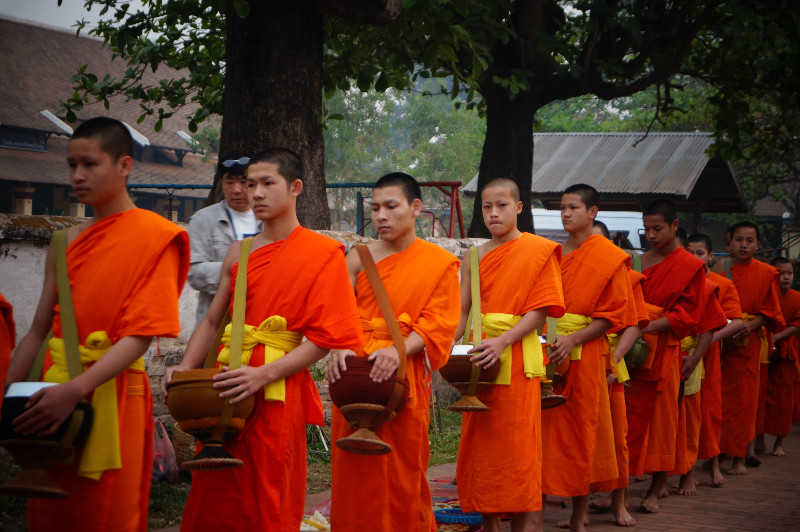 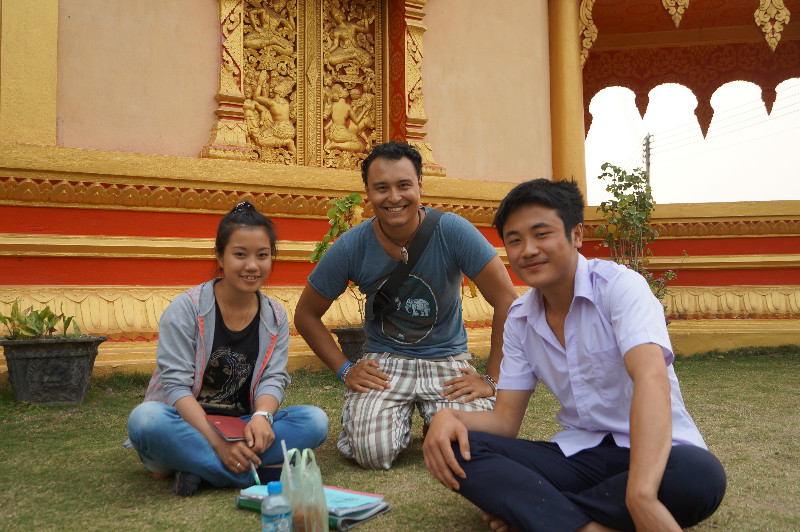 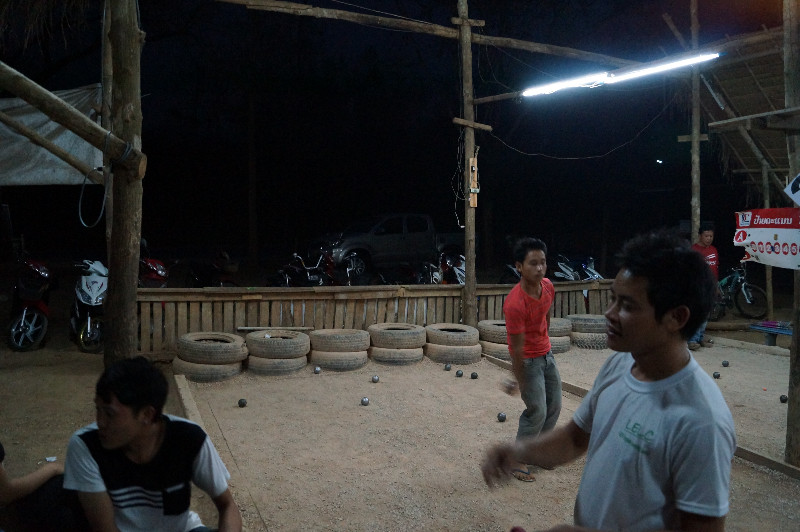 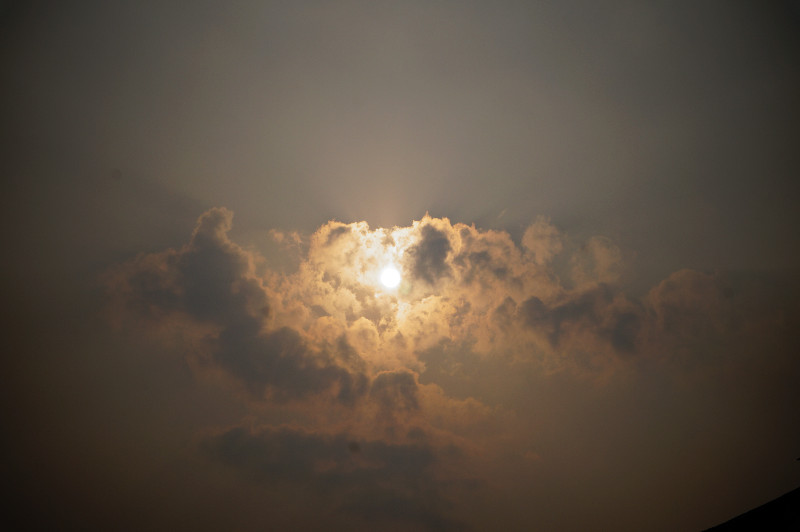 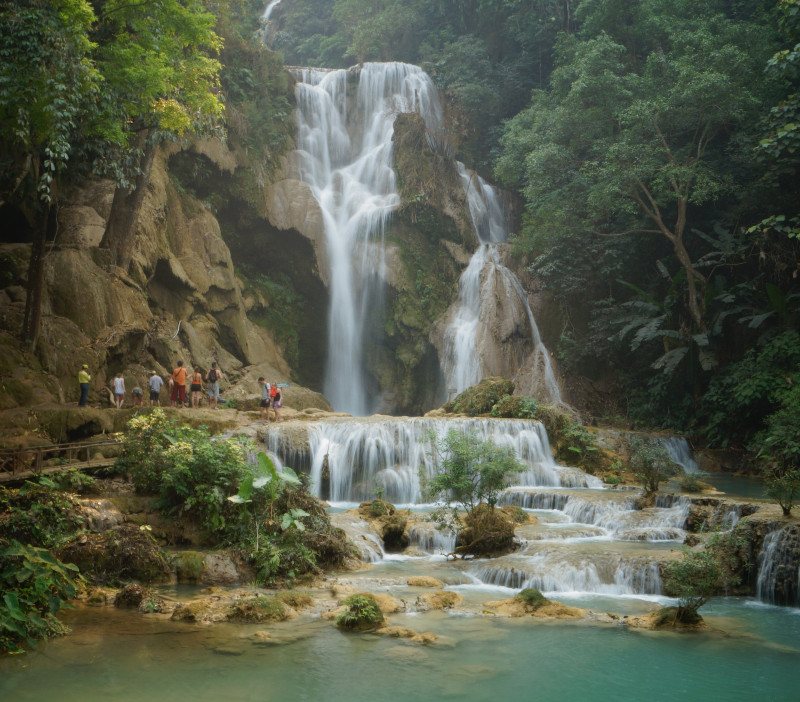 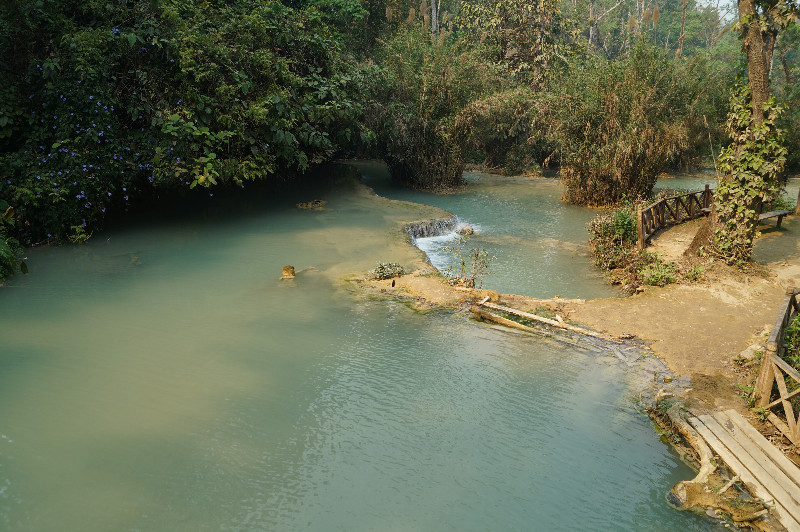 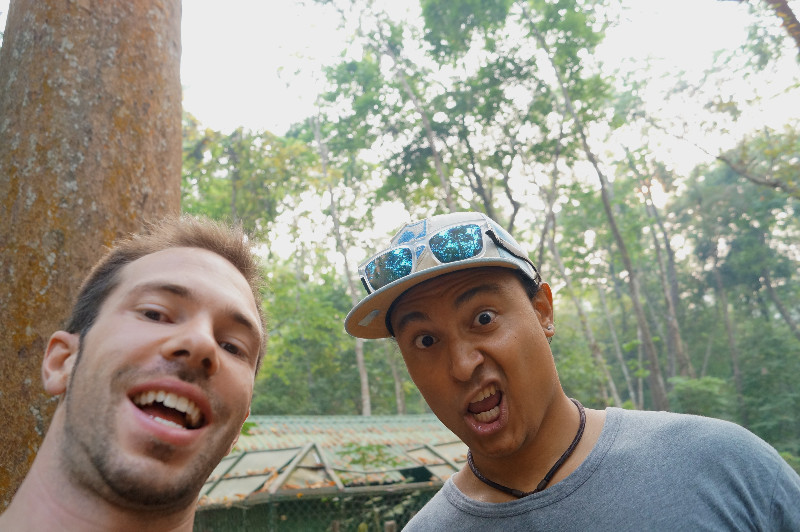 Too hot is not good for the mind...

Another painful bus journey in a packed bus through the dusty roads of Laos and my friend Jonathan and I found ourselves in Phonsavan, in the middle of northern Laos. This region faced a tragic history some decades ago during the second Indochina war with American fighter planes dropping tons of bombs in the area, either when on their way to Vietnam or at their return, to avoid bringing them back to their base. As a result Phonsavan and its region Xieng Khouang were devastated by mass bombing (it is the most heavily bombarded area in the world with at least 262 millions cluster bombs dropped on Laos between 64 and 73, more than during the entire World War II!) but the sad story is that around 30% of those bombs didn't explode right away, leaving inhabitants at risk of stepping on them by mistake and dying horribly. The children especially are concerned because they don't always recognise it is a bomb before it is too late. And it took the U.S a long time to recognise all their mischief here, as this was meant to be a Secret War, meaning that even the U.S Congress didn't know what was going on at that time. Nowadays the Mines Advisory Group (MAG) work with the locals to try to find out as many bombs as they can and to neutralise them before anyone can get hurt. But the task is huge and still around 10-20 people die each year as a result of those left over bombs...

But the main reason to visit Phonsavan is to get a glimpse of the famous Plain of Jars. The Plain of Jars is dated to the Iron Age (500 BC to AD 500) but very little is known about the jars signification. There are about 50 different sites filled in with megalithic jars, where in some burials human remains were found but no one knows exactly if this was the main purpose of these jars or if there was another meaning...
Another problem also when visiting those sites, is the presence of unexploded bombs as I mentioned above. As a result, visiting can only be done on the clearly marked paths and this also slow down the restoration process of the jars and new discoveries. 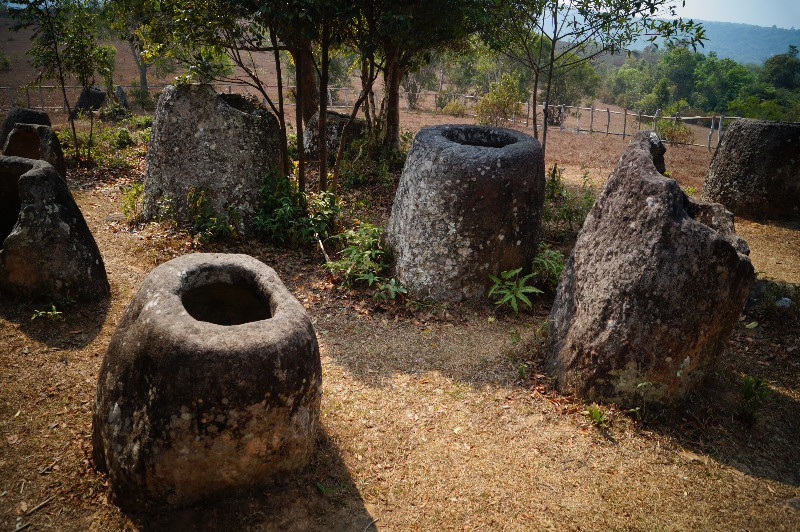 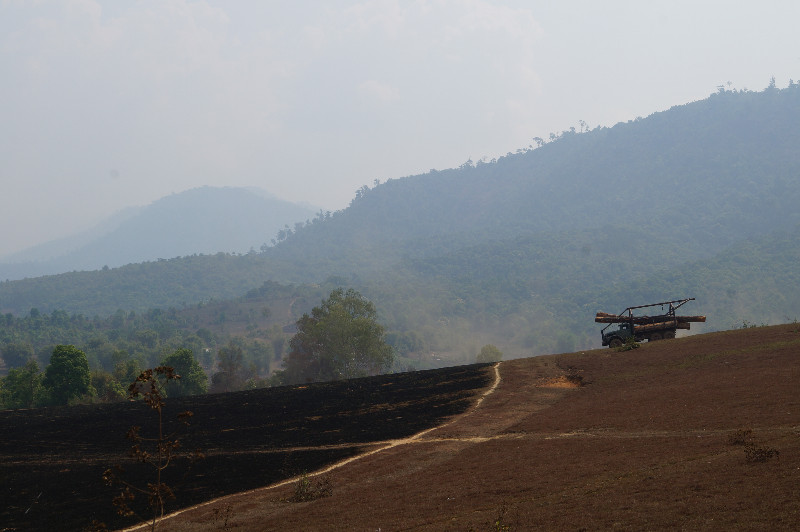 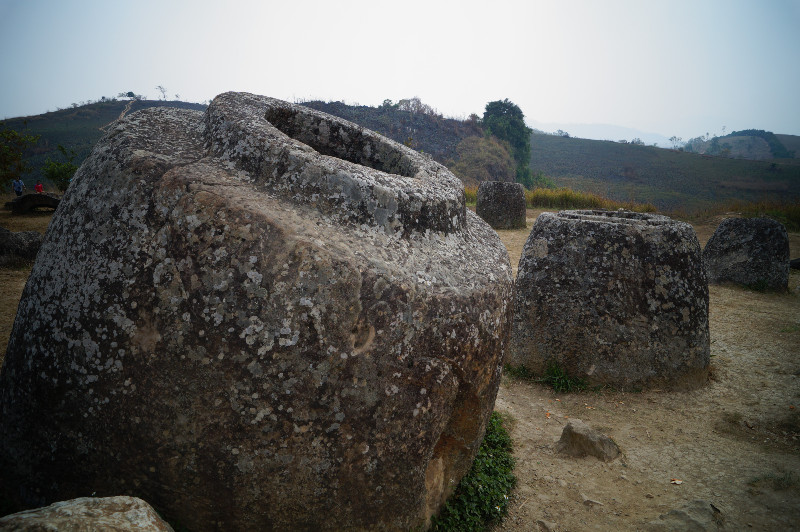 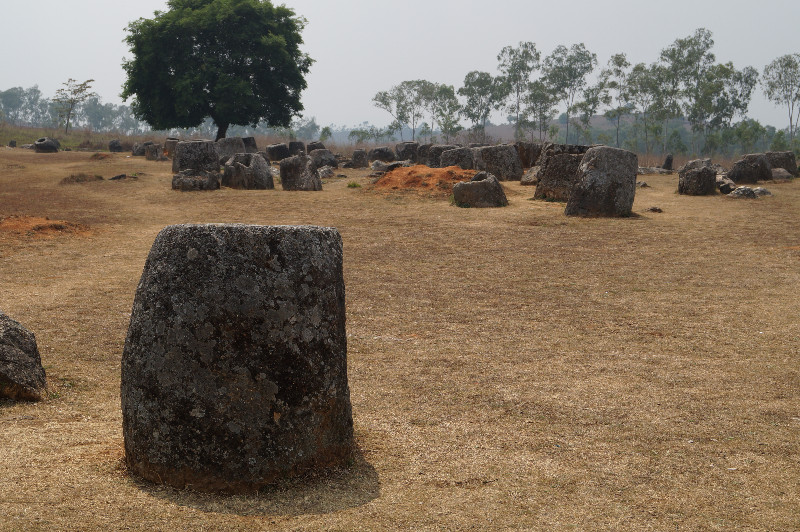 Finally, my last stop in Laos was at its most southern point, in an area called the 4000 islands, an archipelago located in the Mekong river. As its name suggests, there are several islands here, most of them being submerged by the Mekong during the monsoon season. There is not much to do there except chilling out and relaxing, going on a kayak or tubing tour, visiting huge waterfalls nearby or trying to spot the rare Irrawaddy dolphins (an endangered specie due to the Mekong river's pollution). 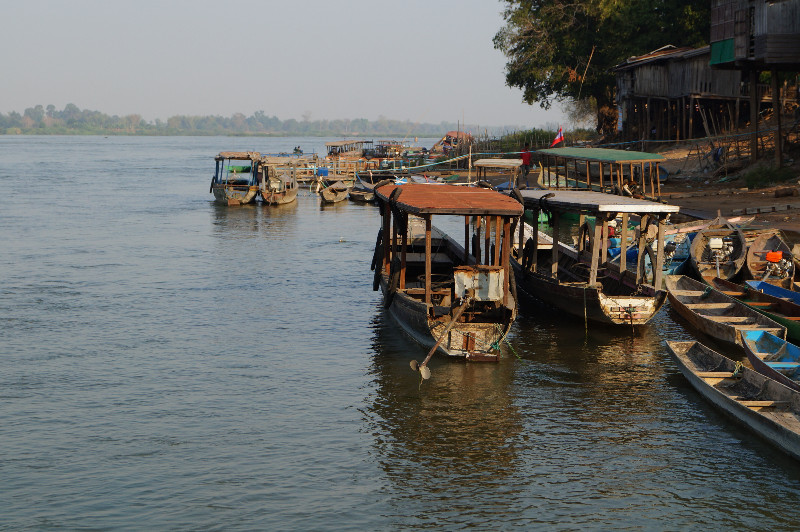 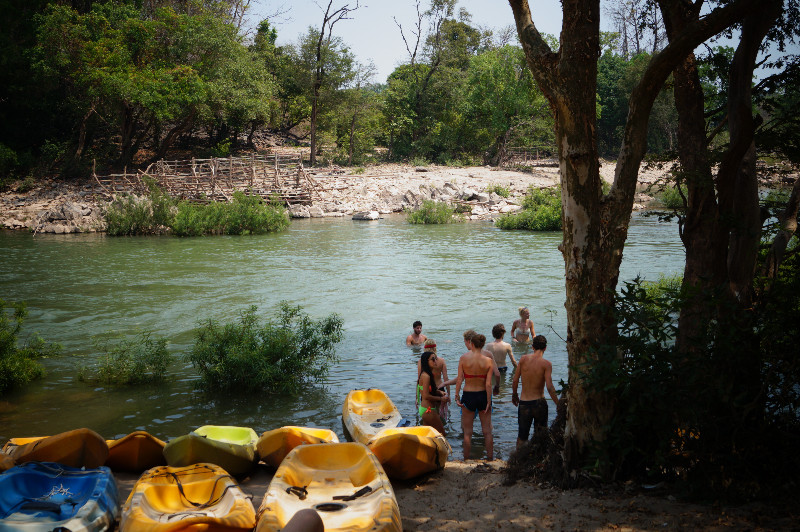 On a kayak tour 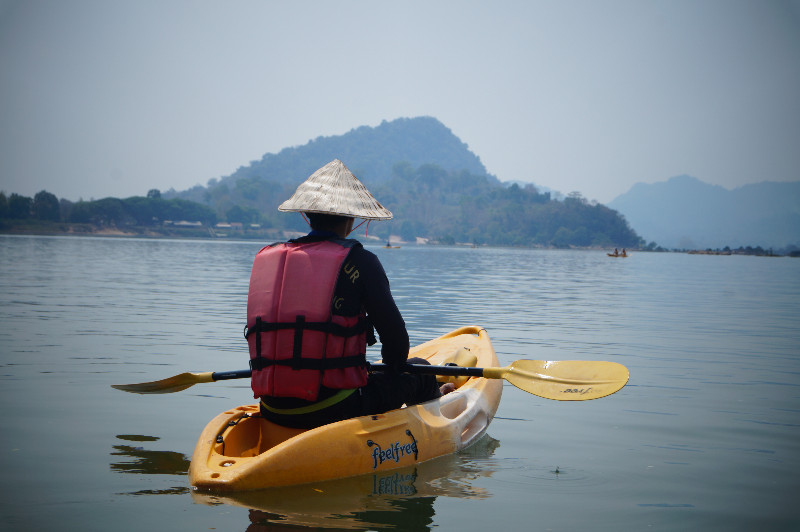 Waiting for the dolphins to appear 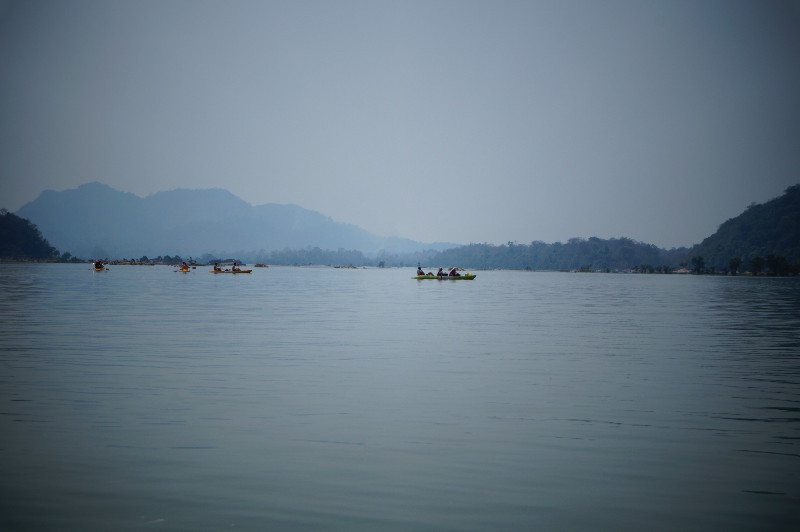 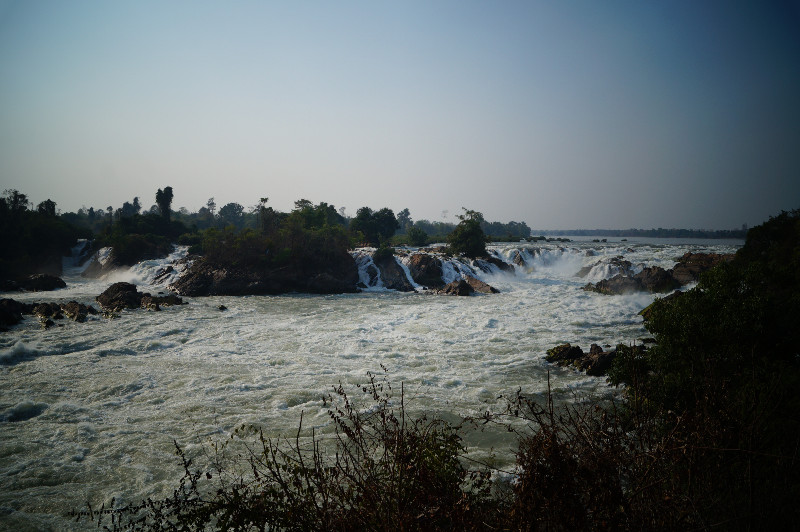 Massive waterfalls on the Mekong 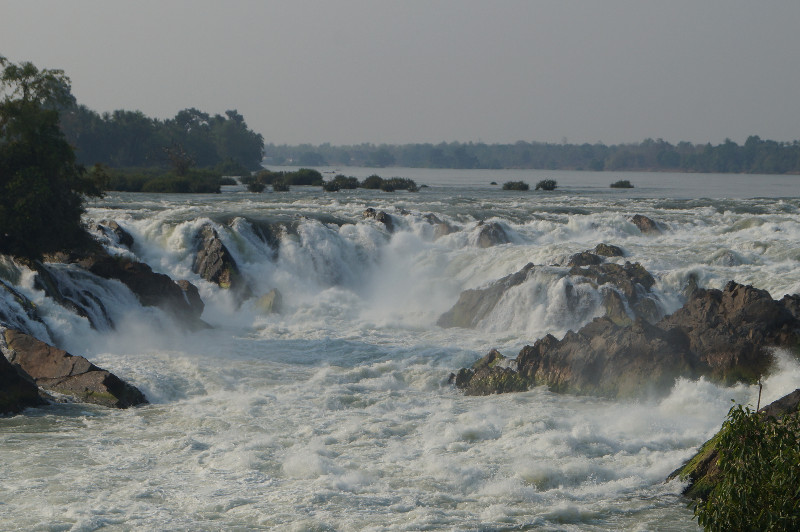 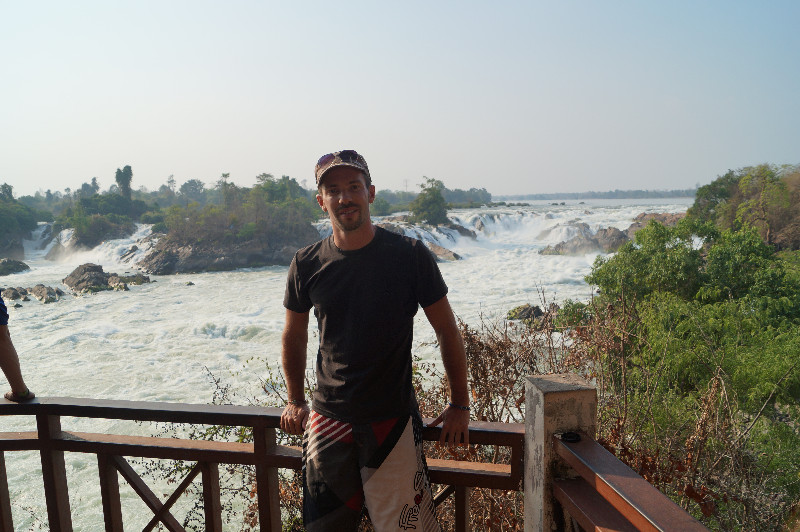 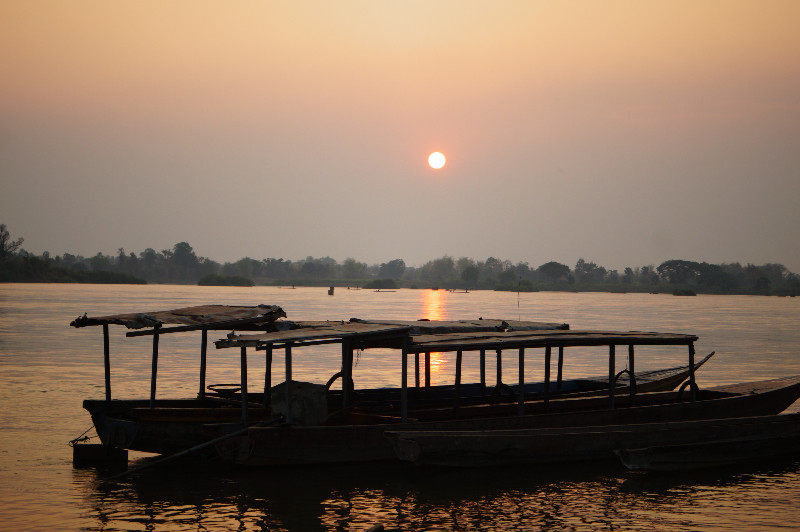