Mexico here I am! 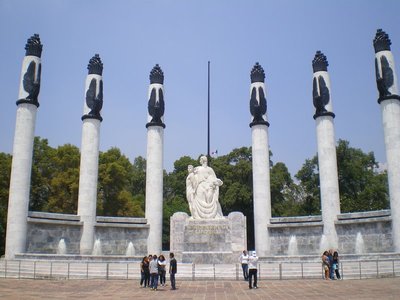 Just a quick post to let you know that my journey has officially started! I arrived yesterday evening in Mexico, after having started at 7.30am from Paris, it was a very long journey...

I started to be a bit worried when checking-in as the woman behind the desk had some doubts about whether or not I would need a return ticket already booked in order to be allowed to enter in Mexico. Sometimes apparently the Mexican authorities can be a little funny and as I had only a one-way ticket with me, it would have been more than annoying to be asked to go back to France.

But luckily this doesn't seem to be the case anymore and the Mexican authorities don't seem to care much, at least for a french tourist who is not planning to stay more than 6 months in the country. The wait in Heathrow T5 airport was a big long (I had to connect there and wait 6 hours because I was flying with British Airways) and the plane was offering the tiniest TV screen I had ever seen on a plane (probably an old one) but we landed without problems at about 2am French time (7pm Mexican time). Going through immigration and getting my backpack back didn't take too long and I was out of the airport less than an hour after.

Took me a little while then to find out where the Metro was, which line I should take and more importantly where my hostel was. Turned out I had completely forgotten to check on a map before the hostel address and after walking for 30 minutes and asking several people (in spanish!) who were sending me in all directions, I managed to call the hostel and find out it was only 30 sec away from the Metro station... doh!

Anyway, I'm a bit jet lagged now so I think I'll spend the next days hanging out and resting whilst trying to establish an itinerary through Mexico for the following weeks. As a surprise, I have just found out a french version of the Lonely Planet to Mexico left in the hostel so I have a bit of reading to do now! The weather is nice at least so the mood is definitely good.

I'm sure it's on your route..
Pirámides de Teotihuacan,
http://en.wikipedia.org/wiki/Teotihuacan

only 50kms from DF, I dind't expect to find something like this so close to the city.

Hey César, yes it's on my plan. Will try to avoid it during the coming weekend as apparently it can get crowded but I've been definitely told that it is a "must see".
Thanks!