On my way to Puebla

As I said before, after spending a bit of time in Mexico City, time had come to start going south and my first stop was Puebla, a old spanish colonial city located about 2 hours drive south of Mexico City.

The best way to travel through Mexico is by bus (there are no trains or very few I have been told) and the bus network is apparently very good. A one-way ticket to Puebla costs about 140 pesos for a 2 hours journey (about 7£) in a fist class bus, which involves a large bus with air conditioned, movies on board, ticket for your backpack wich goes in the bus (for more security), security checks to make sure no one is carrying any weapons, and someone takes a photo of all the passengers before the journey (not sure why to be honest..). For longer journeys, toilets are also available in the bus. Ok, you will tell me "hey that's not really travelling like Indiana Jones!", but for that price, well Indiana Jones will wait. I'm sure there will be plenty of occasions later on when I will regret not having toilets onboard so for this time it's ok...

Puebla is quite small compared to Mexico City (well every city is small compared to Mexico City...). From Wikipedia, the city was founded in 1531 in an area called Cuetlaxcoapan, which means "where serpents change their skin", in between of two of the main indigenous settlements at the time, Tlaxcala and Cholula. This valley was not populated in the 16th century as in the pre-Hispanic period. Due to its history and architectural styles ranging from Renaissance to Mexican Baroque, the city was named a World Heritage Site in 1987. The city is also famous for mole poblano, chiles en nogada and Talavera pottery. The cathedral is worth having a look, as well as all the little streets with houses from every colours. 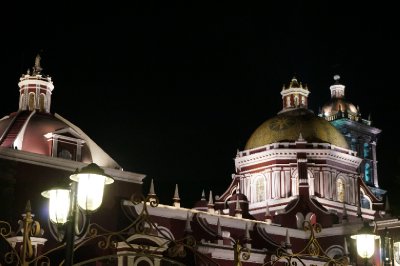 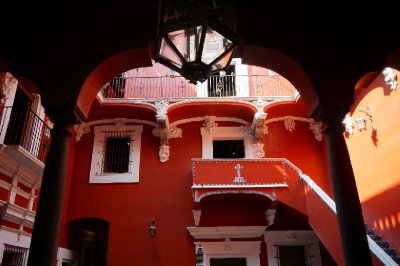 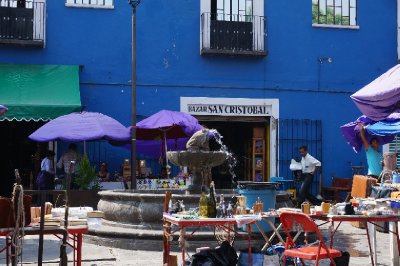 30 min away from Puebla is Cholula, another city which hosts the largest uncovered pyramid in the world, also known as Tlachihualtepetl (Nahuatl for "artificial mountain"), which is a huge complex. It is the largest archaeological site of a pyramid (temple) in the New World. The pyramid stands 55 metres above the surrounding plain and in its final form it measured 400 by 400 metres. The pyramid is a temple that has traditionally been viewed as having been dedicated to the god Quetzalcoatl and apparently the architectural style of the building was closely linked to Teotihuacan. 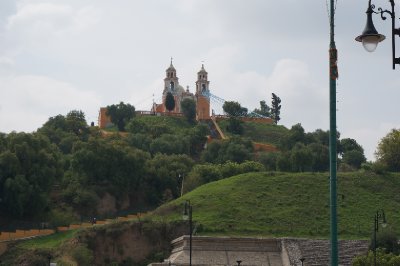 Yes, cemitas indeed, although my stomach was still a bit recovering at that time...