AS I mentioned before my main aim by going to Honduras was to dive! Indeed all along the Caribbean coasts of Mexico and Belize, there is some amazing reef which I couldn't wait to explore in other ways than with a snorkel, this time not by going twenty thousand leagues under the sea (I wish...) but only at a maximum depth of 30 meters.

For a bit of geography, Utila is one of the Bay Islands, off the coast of Honduras, with the other ones being Roatan (bigger, better reef but also more expensive) and Guanaja (smaller but a bit far to reach). Utila is also home to more than 20 dive schools and a lot of tourists are going there to dive. Actually if you do not dive, there is little point to go to Utila, Roatan is a better option though more expensive. This was actually one of the point which I didn't like too much about the island, that there are definitely too many "gringos" and that you lose the local feeling that you can have in other places in Central America.

After making my way to Utila, going through hectic towns like San Pedro Sula or La Ceiba in Honduras, I had to choose a diving school in order to pass the PADI Advanced Open Water certification. 15 years ago, when I was in high school in France (my god it's already that far away....) I had passed the french level 1 diving certification, although it was only in a swimming pool so I was hoping that they would accept this as a valid certification and that they would allow me to try straight away the Advanced Open Water without having to do first the Open Water one which is more for beginners. 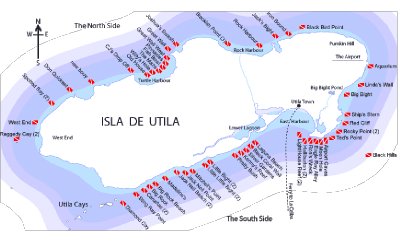 Diving spots around the island

So lying a little bit about the number of dives I had done in the sea (actually they never asked to see my French license), I registered in the Utila Dive Center, not the cheapest place to dive in Utila but one of the most serious with lots of instructors and students instructors (dive masters). The whole course was about 300$ for the certification (7 dives) + 30$ for a refreshment course (which I really needed anyway). And there we were, after practising again the basics, I was taken for my first dive to a ship wreck, down to 30 meters (100 feet)!

Actually this was a bit scary because it was my first dive ever in sea, and we were going to the maximum depth you can reach when diving for "fun" (once down at 30 meters, you cannot go up when you want if there is a problem, you first have to do a safety stop at 5 meters for 3 minutes, to eliminate the excess of nitrogen in your blood. Taking a deep breath, I then jumped into the water, only to find out that my mask did not fit and that it was impossible to clear the water out of it. Of course the others had more experience and were already going down so I was starting to think "ok, this doesn't start that well"... Fortunately the instructor realised what the problem was and going up to the surface (we were only a few meters down at that point), we exchanged our mask and I made another attempt to go down. Second issue though, I had not taken enough weights on my belt to allow for a smooth descent (I found out later that I needed 4.5 kilos of weight to compensate for the wetsuit and gear which always make you float) and I was getting stuck at a few meters below the surface, incapable of going down by myself. Once again the instructor helped me (nice guy from New Zealand btw) by pulling me down to the bottom and a few minutes later I could reach the bottom of the sea where the others were waiting, 30 meters down, near the base of the wreck. Phew!!

My camera not being water-proof, I could not take any footage which would have been really nice, but instead I have found this video of the same wreck on Youtube. This is actually exactly how I saw it, very impressive...

The rest of the dive was totally fine and we could do a few tests to see what are the consequences of the pressure when you are at this depth. For example the colours start to look different (well I am colourblind anyway so not a lot of change for me...), or we even took some eggs with us, broke them and we were playing with the yolk (the yellow part) like a ball with no gravity!

One of the other dives you need to complete as part of this course is a night dive, when you jump into the water armed with a light torch because it is completely pitch black! The wildlife at night is also very different and this was an amazing experience.

And after 7 dives in total (5 are required to be certified), I was officially an Advanced Open Water diver, which means that I can now dive in any dive spot around the world! I had definitely a great time and I am now looking forward to dive more in South America or Asia later on, if my bank account allows it... 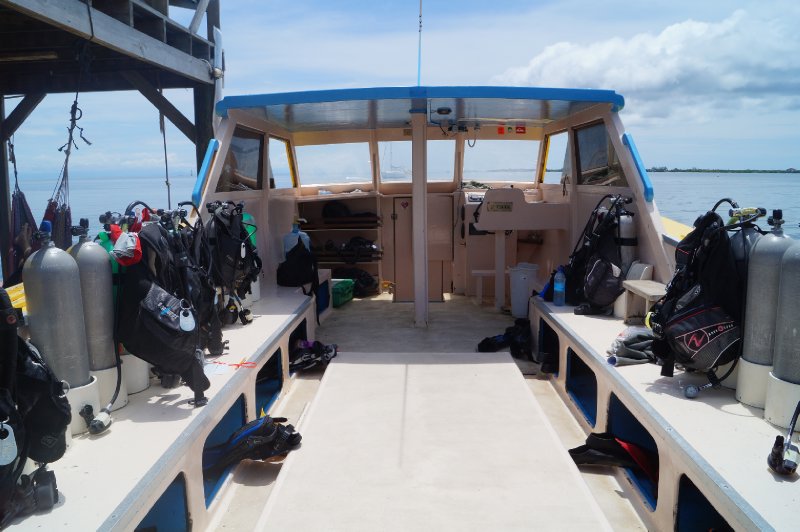 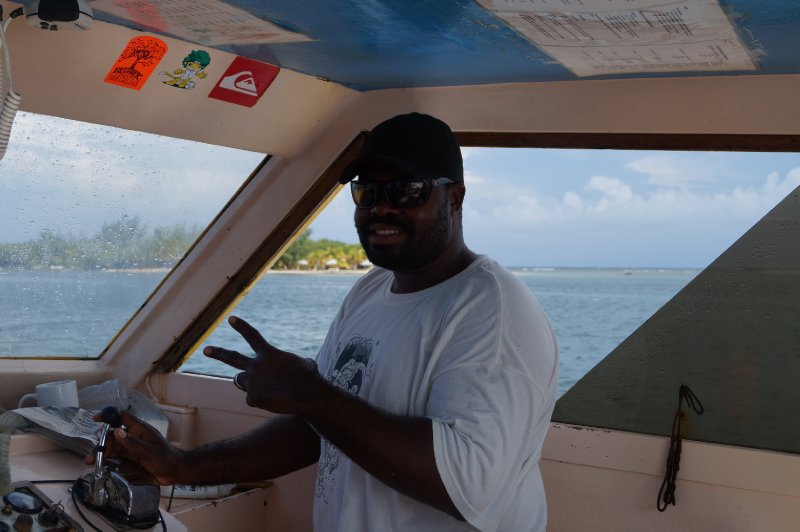 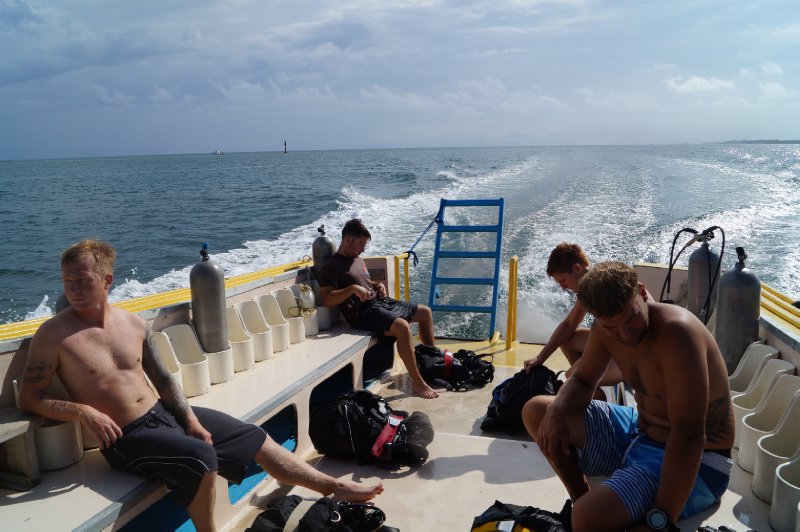 Everybody is quite tired after diving 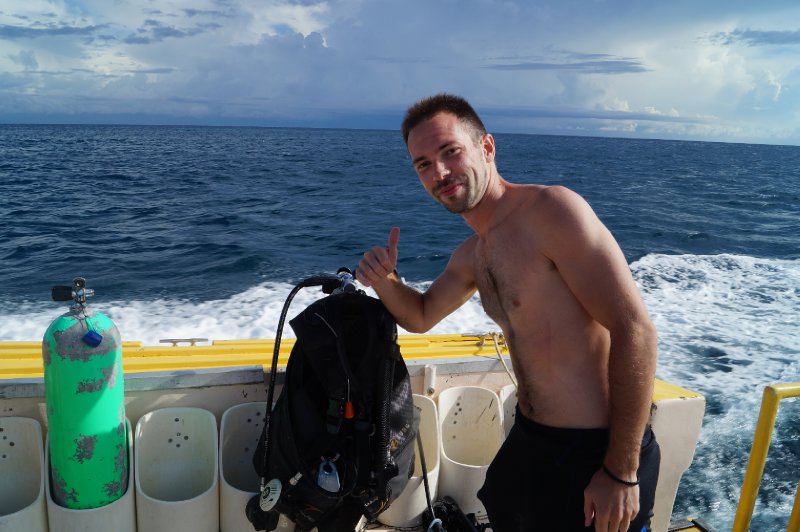 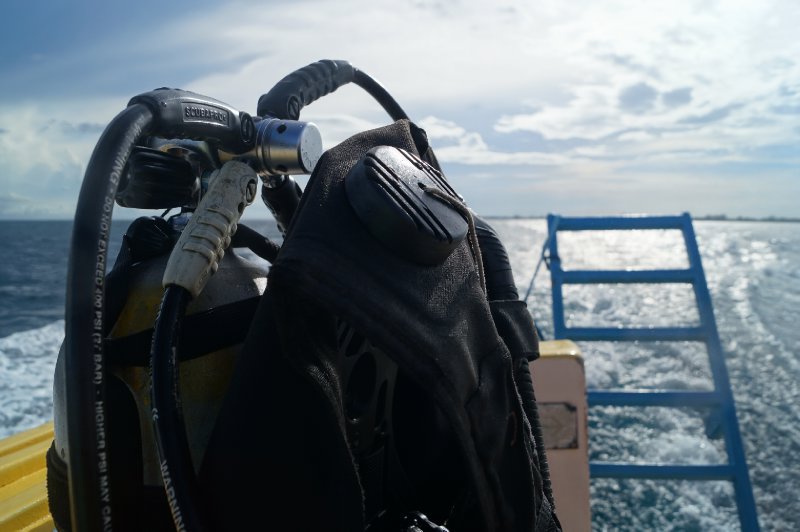 Hey buddy!
Nice pics! I did mine with Cross Creek and they also did the same stuff for the advance course (shipwreck, night, egg yolk), and I am colour blind too! Lol.

Btw, I also didn't like Utila because of the tourists...until I went for a walk deep into the island towards the island's highest peak. Met sooo many locals and it was beautiful. Didn't see any tourists. It was great.

Also, if only u could have been in Belize for Sept. 21 (our independence), you could have enjoyed the carnival. Oh well, hopefully u time ur visits to other countries with their independence days (or festivals).