Time has now come to look back on the last 6 months (and a half) as this is now the end of my trip in Latin America. I honestly cannot believe that it has been more than 6 months since I left Paris on that grey and rainy morning. The time flew so quickly...

In 6 months, I have covered more than 14,000 kilometres on the road (without counting the flights) and visited 13 different countries, sometimes just crossing them, sometimes staying more than a month. At the exception of Belize, all were spanish speaking countries, but unfortunately I have to report that I am still not a fluent speaker, though I can now manage a basic conversation. Certainly being a native French speaker helped a lot as the two languages have a lot in common.

I should have probably wrote it sooner as well but by this post I want to thank all the people I met during that time, friends of a few hours or for some, now friends for life. Some of my friends back home were asking before I started travelling if I was not actually scared to travel alone, and of course I was a bit, this being the first time I was going to travel by myself. But I have to say that I hardly felt alone during the last 6 months. Travelling alone not only forces you to open up with all kind of travellers you meet along the way, but also to interact with locals and the latter is probably invaluable as a traveller. Speaking the local language makes your whole trip totally different and I wished I could have been fluent in spanish from the start, but I know I will come back one day. I have only scratched the surface of Central and South America and there is still so much to discover!

So thank you all, I am so grateful of all the experiences and moments we have shared together and let's hope that we can keep in touch in the future.

I also wanted to come back on some words I heard several times during this trip. Some people I met were indeed complaining that a lot of the interactions they were having during their travels were superficial because most of the time when they met other people, it was only for a couple of hours or a few days, before each moved on to a different place. Whilst this is partly true, I still wouldn't call these interactions or short friendships "superficial". Of course it is impossible to keep in touch with the hundreds of people you meet during a long travel. Even with the help of the social networks, you cannot send a message regularly to every contact you have, but no one expects you to do so as well. Calling these relationships superficial are denying one important fact I think. The fact that everyone can teach you something and that you will never know beforehand what it is.

Along the way I met so many people who shared their stories with me, that I have also learnt more about the different world cultures in 6 months than in my previous 29 years. And while travelling there is also no "social pressure" of having to behave like everyone (family, friends back home) expects you to, so you can really be yourself without constantly trying to please everyone around you. By this I am not saying that back home, everyone acts "fake" but you see what I mean, there are social conventions which make you sometimes not behave like you would like to or to not say everything you would like (at work, in your friend's circles, etc...). And by freeing yourself from these social chains, you actually realise who you really are, what you really like, what you really don't like, and many more other things. In other words you really discover yourself.

In one hand you are a bit more selfish but in a good way if I can say so. On the other hand you need to keep in mind that you can actually learn from everyone, even from the people you wouldn't expect to (it's probably those ones who will surprise you the most). And it is also likely that some people will probably learn from you and your experiences, no doubt about it.

All that to say that travelling is all about sharing, about opening up to the world and to the others. About not judging on the appearances. And as usual in life, the best things and experiences happen when you least expect them...

To finish this post here are a few stats about these 6 months spent on the road: 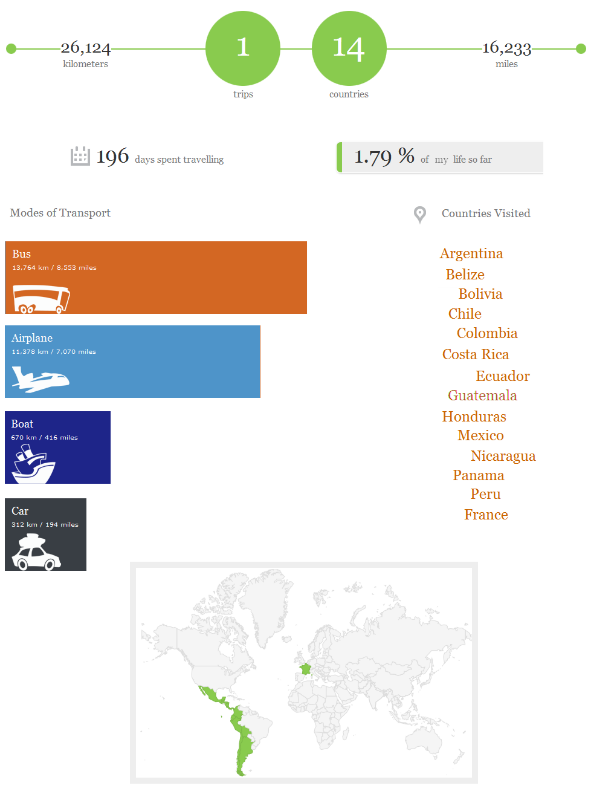 Meeting New people on your travels, whether or not you like them, is a good experience. It teaches you how people perceive themselves and offers you new ideas how different cultures/countries/religions impact upon you and your travels and the world around them......sounds like you've met too many superficial French hahha (gotta love our two nations camaraderie)
I met you On the dance floor of curandero bro, a really good night with SuagarBear and one of many that I had in my 9 months in c. America, Love your blogs mano. Peace love and unity in the community

"whether or not you like them" exactly Kris, that's what I was saying. Actually there are more Germans and Brits travelling the world than French I think...

Yeah don't worry I do remember well how we met, and our conversation about Mayas and pyramids afterwards... Thanks for your comment anyway! Take care!

"Along the way I met so many people who shared their stories with me, that I have also learnt more about the different world cultures in 6 months than in my previous 29 years." Well said, mate! This is why travelling is so important. It opens our eyes, and we learn way more about the world, its people, and life in general when we get out of our comfort zones, and just explore!
Keep living the dream, Mano!