From Quito to Huaraz by bus

This time here is a post which differs a bit from the others as this is mainly an informational post for people who want to travel from Ecuador to Peru at a lower cost. I was looking for this type of advices myself when I was in Quito and wanted to go directly to Huaraz in Peru, but at the time there was only little information available on the internet. So here is the summary of my journey:

I was originally planning to go straight to Huaquillas but someone recommended to go first to Guayaquil as there is a huge bus terminal there and it's easy to hop on any bus and compare the prices of the different companies.

I therefore went from Quito to Guayaquil for 11$ (8 hours) with Panamericana buses and left Quito in the Friday evening (10pm) to arrive in Guayaquil around 6am the next day.

In the beginning my plan was to cross the border myself by stopping on the Ecuadorian side, getting my passport stamped, finding a taxi to cross the border and getting my passport stamped on the Peruvian side. From the lonely planet and other reviews I could read online, this border crossing is apparently the most dangerous or the most painful as it is frequent that taxis try to scam you (taking you somewhere else to take your money) or that fake policemen do the same. 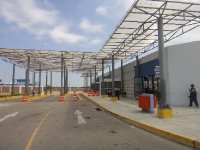 So the best was for me to book a bus which would stop at the immigration points, wait for me to get my passport stamped, and then carry on into Peru. I therefore booked a CIFA bus to Tumbes (Peruvian town near the border) for 10$ leaving at 7.20am (so only had to wait 1 hour in Guayaquil), and the bus stopped outside Huaquillas for the immigration (both Ecuadorian and Peruvian), then carried on to Tumbes.

That is actually what has changed recently. I believe the Ecuadorian and Peruvian authorities became aware of the problems at the border and decided intelligently to gather the immigration points in Huaquillas, which means that you also get the Peruvian stamped there, thus avoiding another stop on the other side of the border.

Carrying on, at Tumbes I went off the bus, got my bag and started to ask for other buses to Trujillo, but I was told that actually my bus was continuing after Tumbes until Piura, which was a better spot to hop on other buses. So I went back to my bus and left at Piura (without paying extra which was nice). The whole journey Guayaquil to Piura was quite long as in total from Guayaquil it took us 12 hours, arriving in Piura around 7pm.

With a bit of hindsight, I think the best is to take a bus directly to Huaquillas (like Panamericana) and find the CIFA bus station to hop on the same bus I took from Guayaquil. We were in Huaquillas around 11am-12pm so make sure you arrive early and you will save a few hours and probably a few dollars as well.

Then from Piura I took a taxi (5 soles) to the Chichay Suyo agency (as I was told they were the only ones going to Huaraz) and but found out that actually there weren't any direct bus to Huaraz and that instead I had to go to Chimbote (which is located after Trujillo) for 35 soles (10 hours). The bus wasn't the best (no space for legs, a bit smelly and making stops all the time) but I think you can take Itzza buses which are more comfortable for about the same price. We then left Piura at 10.30pm and arrived next morning at 7.30am.

The Chimbote bus terminal is quite big (a bit like Guayaquil) so it's easy to find a bus to your next destination. As soon as I arrived, I started to look for bus departing soon to Huaraz (I was thinking that I might as well get over with the whole journey as quickly as I could) and managed to find one with Alas Peruanas leaving immediately (for 20 soles)! So no time for coffee or breakfast unfortunately and we were on our way to Huaraz, where I would arrive 5 hours later, at 1pm.

So to sum up this was quite a long journey but the bus times worked perfectly as I only had to wait 1 hour in Guayaquil and 3 hours in Piura. The total bus time was then 35 hours for a price of about 43 US$. I think I saved a lot doing things that way rather than taking an expensive Ormeño bus (which are going daily from Quito to Trujillo for about 80US$). I was going to Huaraz but if you go to Lima, you can find bus services to the capital in both Piura and Chimbote as well so not really an issue there.

The only thing you need to be aware now when planning to cross the border, is that both the Lonely Planet and Rough Guides are wrong as you do not need to go to Peru to get your passport stamped, it all happens in one place now (as mentioned above). 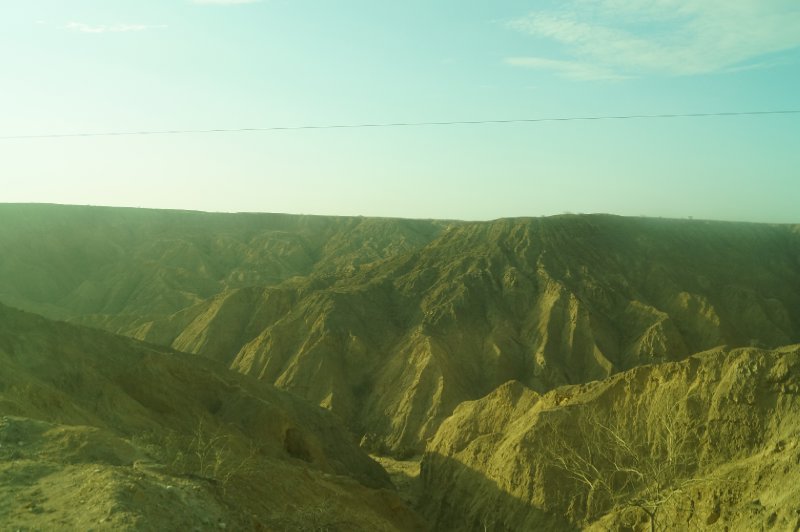 View of a Peruvian canyon from my bus window

Quito and the Middle of the World

My post about Ecuador will not be long as I only had enough time to visit Quito and its surroundings.

There are quite a few things to do in Ecuador, for the adventurous trekkers who wish to climb the Cotopaxi volcano (5,897 m), or the wildlife lovers who want to explore the Galapagos islands for example. The Amazonian basin is also quite popular with boats going to Iquitos in Peru, and other towns and places which are popular among the Ecuadorian and foreigner tourists.

A trip to the Galapagos is indeed very expensive (at least 1500 US$) for a one week trip on a boat (+ the flights) so I will probably come back during another journey, when my budget will be more consequent, as all the people I met and who went there definitely had a great experience.

So my primarily aim this time was to reach Peru (Huaraz) as quickly as I could, and therefore I only took the time to take a few shots in the capital and also took the opportunity to visit the city called Mitad del Mundo (Middle of the World) where the Equator line is passing through. Nothing amazing nor extraordinary but something to cross off my checklist! 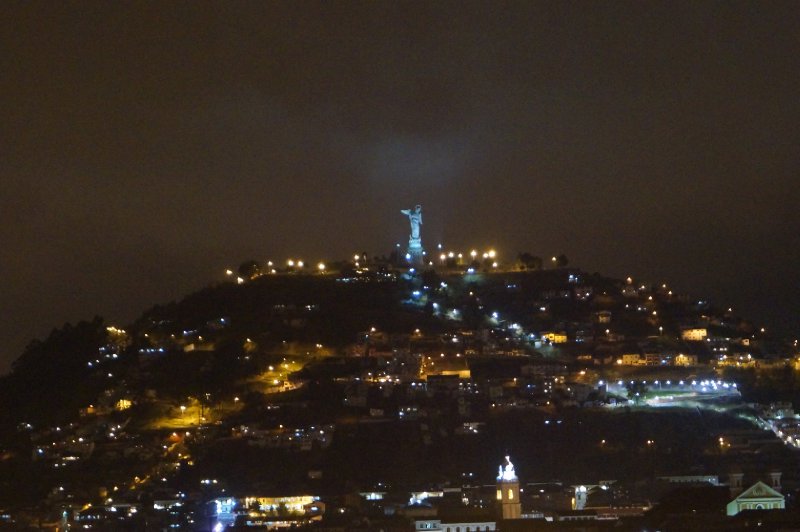 Woman of the Apocalypse, by night 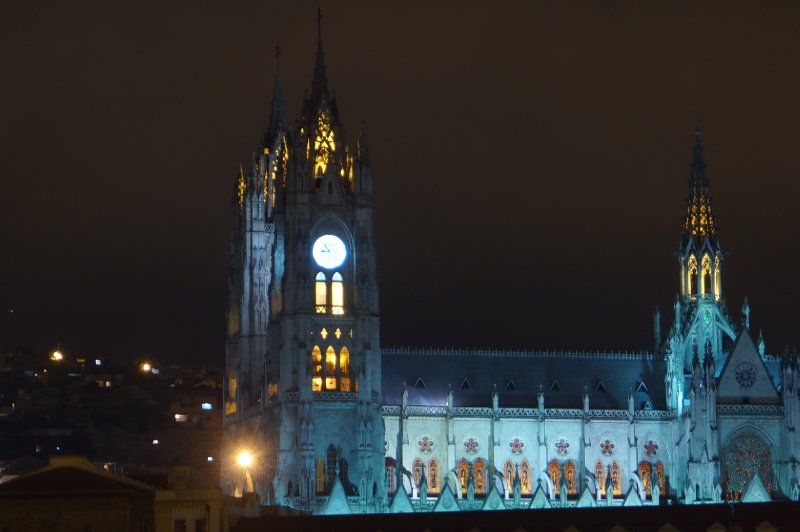 The Cathedral of Quito, by night 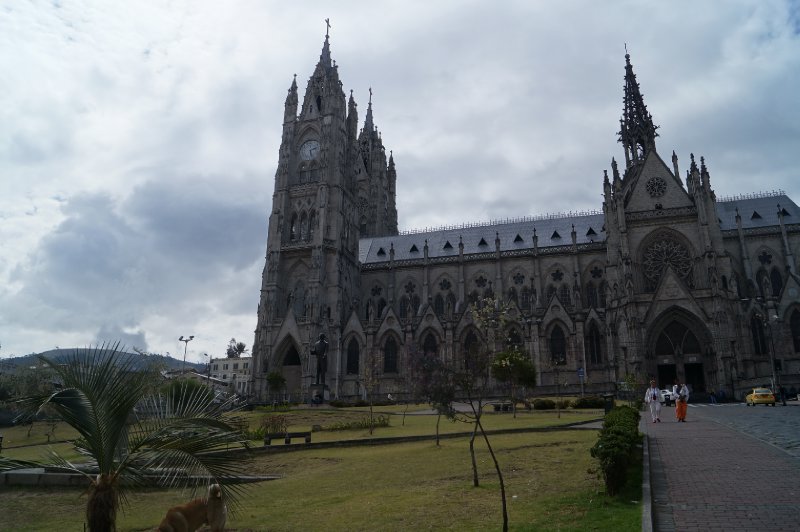 The Cathedral of Quito 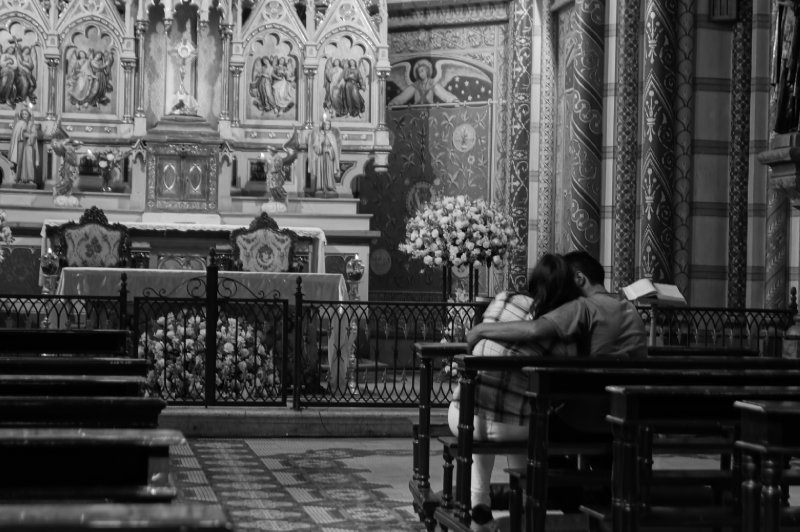 Couple praying inside the cathedral 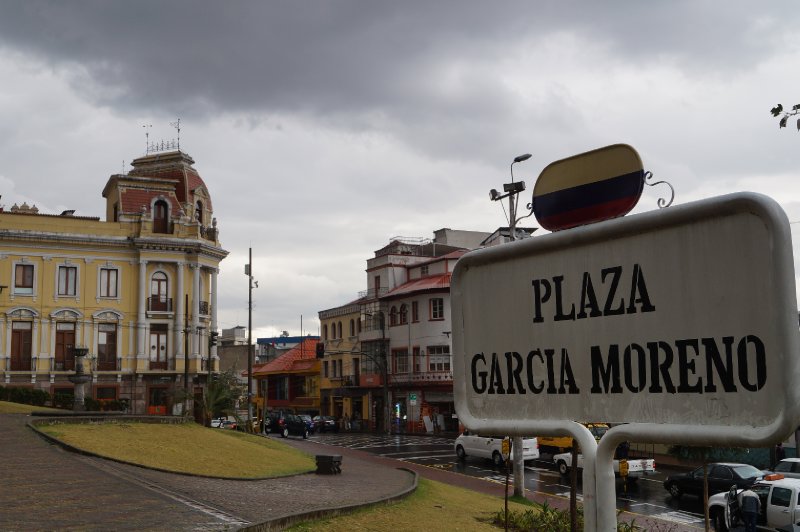 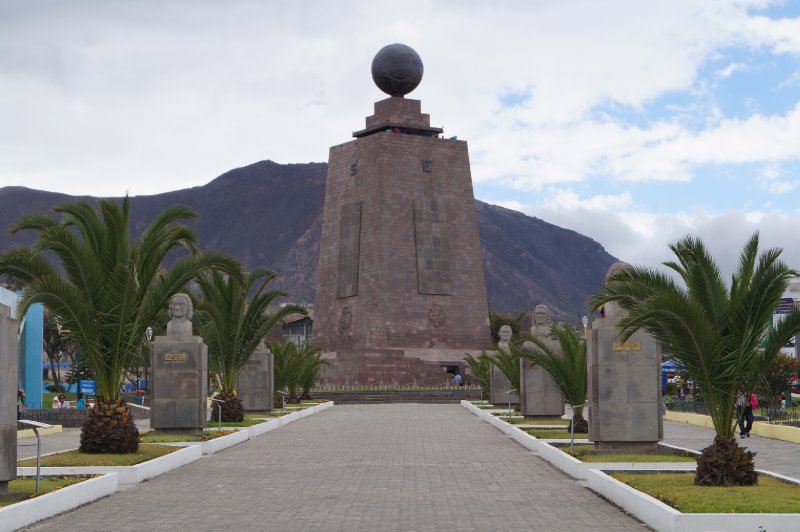 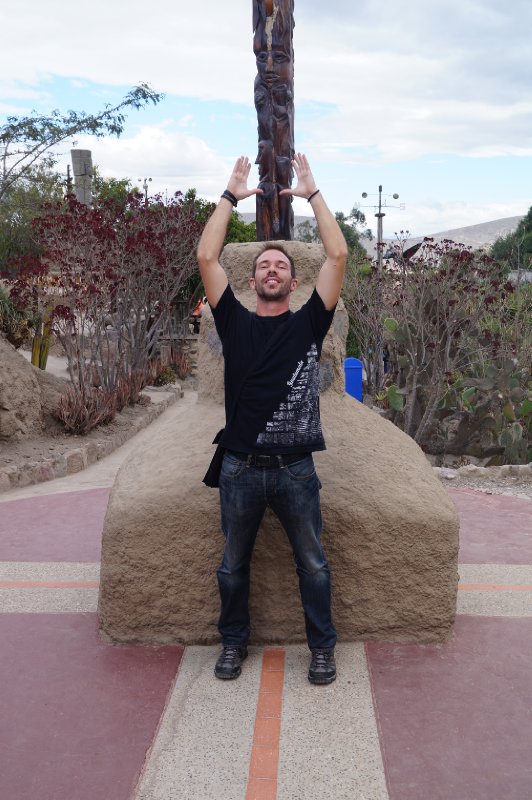 500m further, the real GPS-calculated line of the equator. One foot in each hemisphere then! 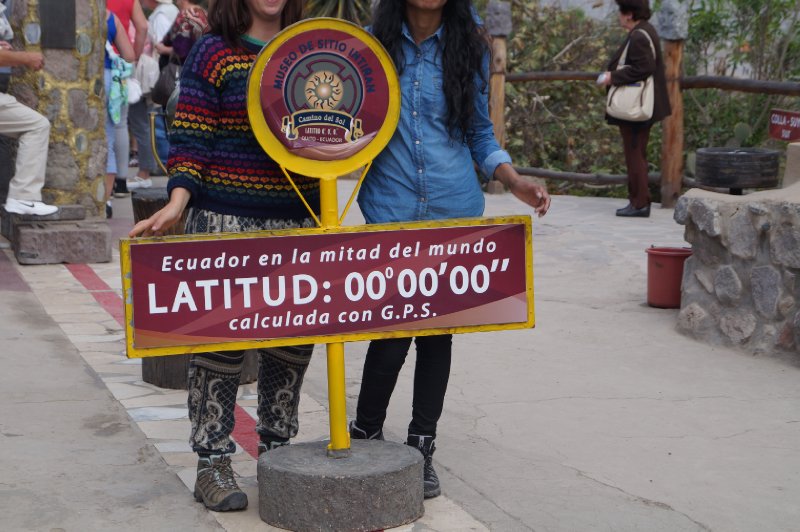